A Brief History of St. Katherine of Siena Church 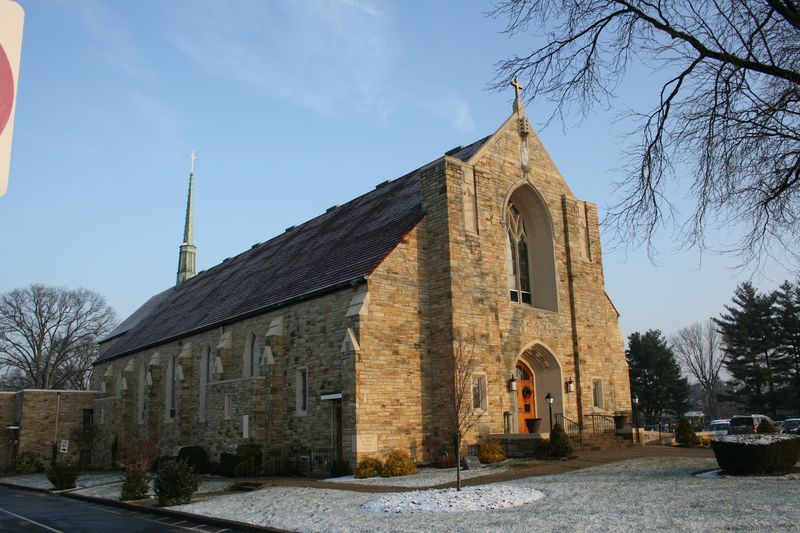 From June to December 1922, parish Masses were celebrated in the chapel of Louise Morrell’s home on Knights Road. This chapel later became St. Michael’s chapel and ultimately, the Shrine of the True Cross. Today, the Morrell home and Shrine are part of the administrative complex of the Aria Frankford-Torresdale Hospital.

The Morrell estate was also the setting for Catholic schooling for children from the Torresdale – Cornwells Heights area, still very rural in the early years of the twentieth century.  This school had its beginning about 1900 and continued until 1922.   One early student was Anne O’Rourke, whose   parents had built a summer home that today is the parish rectory.

To show his thanks to Louise Morrell and to honor Mother Katharine, each of whom was neighbor and benefactress, Father Coakley chose to spell the name of the new parish with a “K” rather than with a “C.”  The traditional name of the parish’s patron, and Mother Katharine’s patron, was spelled “Catherine,” a fourteenth century saint from Siena, Italy, and a Doctor of the Church who lived from 1347 to 1380. St. Catherine of Siena continues to be an inspiration in her heroic loyalty to the Church.

In 1907, Mother Katharine Drexel visited the church of Santa Maria Sopra Minerva, Rome. Here a major relic of the Saint from Siena who was also Katharine’s patron is venerated. On October 1, 2000, Mother Katherine became the first female, canonized saint from Philadelphia. 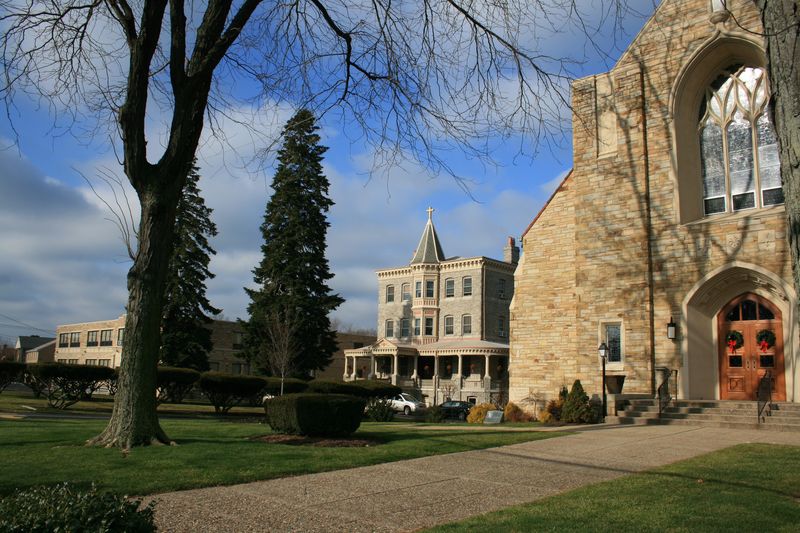 On December 10, 1922, Father Coakley celebrated the first Masses on St. Katherine’s parish property in the combination Church/ Rectory.  In the early years of the parish, the number of parishioners was relatively few, and this Rectory/Church arrangement was, in some sense, adequate. However, in the late forties and early fifties the growth rate of the parish population was notable, and a larger church was a necessity. Accordingly, on November 14, 1954, Father Thomas P. Fitzgerald, the third pastor, broke ground for our present church.

On Wednesday, October 24, 1956, Monsignor Thomas F. McNally, Vicar General of the Archdiocese of Philadelphia, blessed and laid the cornerstone of the church. This event was followed on Saturday, October 27th   by the consecration of the main altar by Auxiliary Bishop Joseph McShea.  Finally, on Sunday, October 28, 1956, Bishop George L. Leech of Harrisburg, a classmate and seminary friend of Father Fitzgerald, dedicated the church and celebrated the First Solemn Mass in the new edifice.

Ten years later, and as one result of the Second Vatican Council, languages other than Latin were permitted in parts of the Mass.  Thus in 1966 the initial step was taken eventually leading to the present day use of English for the celebration of Mass.  Permission was also given for churches to have a freestanding altar with the Celebrant facing the congregation.

In September 1967 the Parish Council encouraged Father William F.  Drobel, our fourth pastor to move the main altar forward and to add a marble lectern for use by the Cantor.  Under the direction of Father Drobel, all work affecting both altar and tabernacle was completed, and the first Mass was celebrated with the newly configured Sanctuary on March 8, 1969.

Around the time of the changes to the Sanctuary a near disaster was luckily averted after a lightening bolt hit the original cross above the front door of the church.  A replacement cross was fashioned by parishioner Edward Litvinas and placed atop the church by Atkinson & Sons Steeplejacks.

From the changes made to the altar to the present, the integrity of our Sanctuary has remained relatively untouched. Following the 1999 closing of St. Anthony of Padua Church in the Schuylkill section of the city, Monsignor James P. McBride, our fifth pastor, was fortunate to acquire two large marble angels that today stand in our Sanctuary.  These statues which enhance the prayerful atmosphere of the sanctuary were given in memory of Charles and Nancy Hausmann, and Charles Scully.  Further improvements inside the Church centered on the location of the Baptismal Font and the upgrading of the lighting and amplification systems.

A further improvement made during Monsignor McBride’s pastorate was the addition of a handicapped accessible ramp at the front of the church.  The ramp, which matches the beautiful stone work of the original building, was designed by Rick Paul and installed by Jim Vallorani in 1995.  Completing the effort of these two parishioners was a third member of the parish, John Hladczuk, who fashioned and installed the hand railings and wrought iron supports, which complete this practical addition. 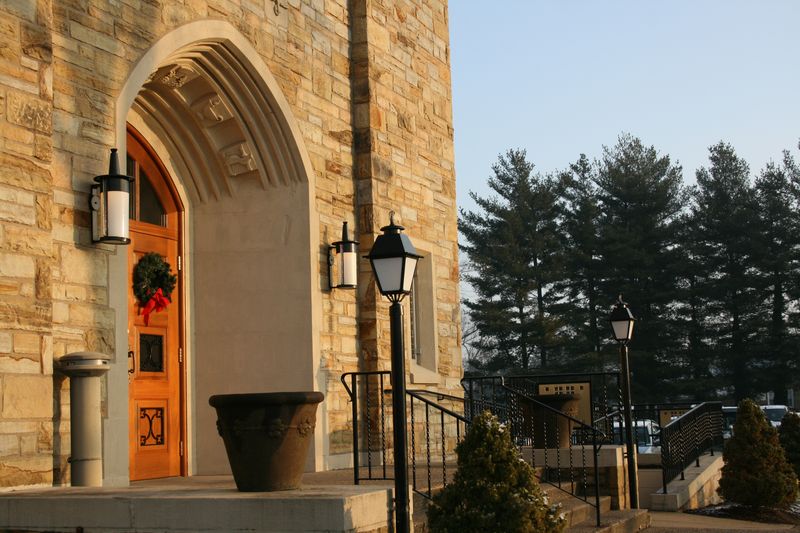 To commemorate the beginning of the 21st Century and to pay tribute to the patronage of  St. Katherine of Siena and St. Katharine Drexel, Monsignor McBride commissioned the Callanan Stained Glass Studio to install two new windows at the side entrances of the church.  These tasteful additions enhance the beauty of our church and remind us all of our holy patron and saintly benefactor.

In the year 2006, the Golden Anniversary of the dedication of St. Katherine of Siena Church, our parishioners once again enhanced the Church’s beauty. Through the successful “Refurbish – Repaint – Repair” campaign under Father Paul M. Kennedy, our sixth pastor, the complete interior of the church was painted while the exterior was sandblasted and treated for protection against the elements.

In 2010 a small, hand-carved wooden chest was installed on the altar dedicated to St. Joseph. This chest, with shelves behind a glass door, is called an  ”AMBRY” and is distinctively fashioned  in the shape of St. Katherine Church. In it are displayed three holy oils used in the celebration of  four sacraments: Baptism, Confirmation, Ordination and  Anointing of the Sick.  The Ambry was blessed by Bishop Joseph P. McFadden during Mass on March 12th , within which the Sacrament of Confirmation was also celebrated.

Each year on Holy Thursday morning during the Chrism Mass in the cathedral, the Bishop blesses these oils. In small containers, the oils are distributed to all parishes in the diocese. The oils are Sacred Chrism, Oil of Catechumens, and Oil of the Sick.  The word “ambry” comes from the Latin for a military chest in which weapons were stored. In a sense, the holy oils are weapons in the Christian’s fight against the devil who is the enemy. In biblical times, oil was a sign of abundance and joy.  Oil is also associated with cleansing, healing, strength and consecration to God.  Priests and kings were anointed. The word “Christ” and “Christian” fittingly mean “Anointed One.”

Through the invocation of these saints and also that of our patroness, St. Katherine of Siena, we  pray for all those who, through these Holy Oils, will be brought closer to the  Lord Jesus.

We are indebted to local woodworker Timothy D’Alessandro for his detailed work and artistry.  In depicting the Ambry as the façade of St. Katherine of Siena Church, we grow aware of  the sacramental  bonding between our parish church and parishioners. 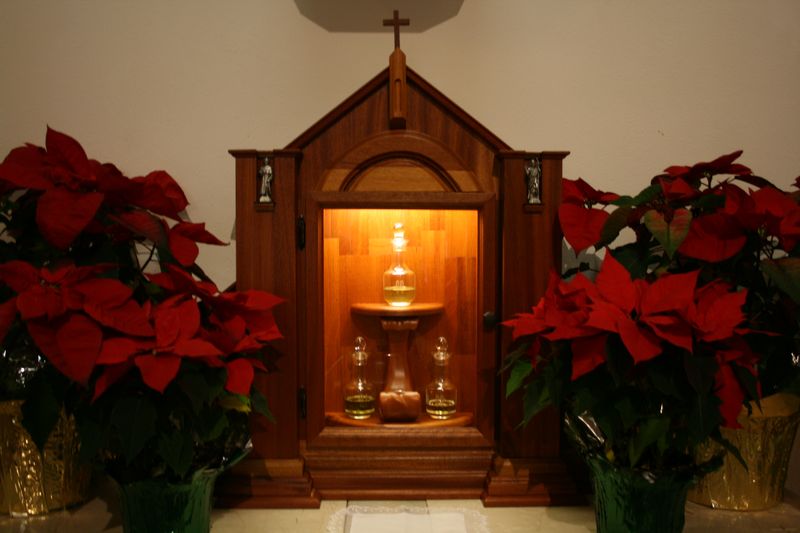 The planning for a new church takes considerable time, expertise and patience.  When Fathers Fitzgerald and Dougherty and the parishioners of St. Katherine of Siena chose the Jean Barillet studio from Paris, France to design and execute the stained glass windows, they were indeed pleased.  Each window has a beauty of its own, and together they add a certain majesty and grandeur to our church.  After fifty-four years these works of art began to show signs of age and wear.  The dark colors, and the deep hues, catch and hold the heat of the sun which beats equally on each side of the church truly from sunrise to sunset.  During the summer of 2010 a process was begun to clean, restore and brace each of these masterpieces.

Certainly, the show piece of our church’s stained glass is the magnificent window of St. Katherine of Siena located in the choir loft above the main doors.  During the restoration it was found to be in need of extensive and immediate repair.  The glass was carefully removed and expertly tended to by artisans from the David Albert Studio under the direction of Daniel McIntyre.  Finally, all twelve sections of the newly restored windows were re-installed.  Also installed at that time were new ventilator windows with screens in the choir loft, and in the six large windows in the nave of the church. 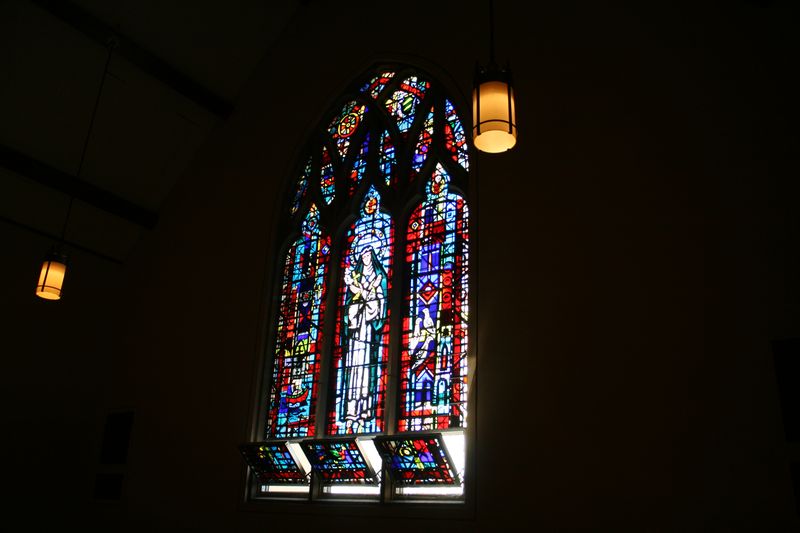 Please take a moment on your way out of church to admire the artistry of the fabricators of our windows, as well as the skill of the restorers.  Then say a prayer of thanksgiving that this process has once again allowed the light to shine through St. Katherine.

In October 1956, the priests and parishioners of St. Katherine of Siena parish were overjoyed to finally have their own distinctively beautiful church. They had worshipped in the rectory basement and on the first floor of the rectory since 1922. Father Fitzgerald and his parishioners showed great vision in breaking ground in 1954. Their vision and sacrifices resulted in our magnificent church, which is today, and always will be, the heart of St. Katherine of Siena parish.