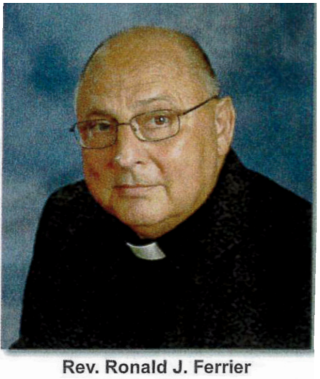 Father Ferrier was born in Conshohocken, Pennsylvania on April 16, 1940 to Jeremiah and Margaret (Fulginiti). He attended St. Matthew’s Parochial School and St. Matthew’s High School both in Conshohocken. He entered St. Charles Borromeo Seminary in 1958 and on May 18, 1968 was ordained to the Priesthood by John Cardinal Krol.

After one year as the Assistant Pastor of St. Isidore Parish in Quakertown, PA Father began a 40 year teaching career at Cardinal Dougherty High School in Philadelphia where he taught Physical Science and Latin. While teaching, Father earned a M.S. degree from Villanova University. During his time at CD, Father resided in three different assignments: six years at Visitation Parish, Philadelphia seven years in Our Lady of Consolation in Tacony and 27 years as Chaplain to the Sisters of the Holy Family of Nazareth in their Provincial House in Torresdale.

Upon leaving Dougherty Father was assigned as the Parochial Vicar at St. Katherine of Siena.

In addition to his love of celebrating Mass and administering the Sacraments, Father had a “green thumb” which continues to be evidenced on the parish campus. Carefully choosing the right plants for the right spots Father transformed the parish grounds so much so that in 2014 the parish was awarded the “Green Space Award” from the Horticultural Society of the State of PA.

May his gentle soul rest in peace!