Congratulations to our Candidates for Sacraments

On October 27, Fr. Kennedy inducted 89 parish children from the 6th grade as candidates for the sacrament of Confirmation.  This was the first official step in their preparation for receiving the sacrament on March 22, 2014.

As a parish family we celebrate with Our third grade children are preparing to receive two sacraments;  first  reconciliation and first eucharist, this school year.  At the 10:00 mass this Sunday, November 3, the students will be officially recogized as candidates to receive both sacraments.  After mass there will be a short Retreat presentation for the children and their parents.

As a parish family we pray that the children accept the graces of these sacraments. 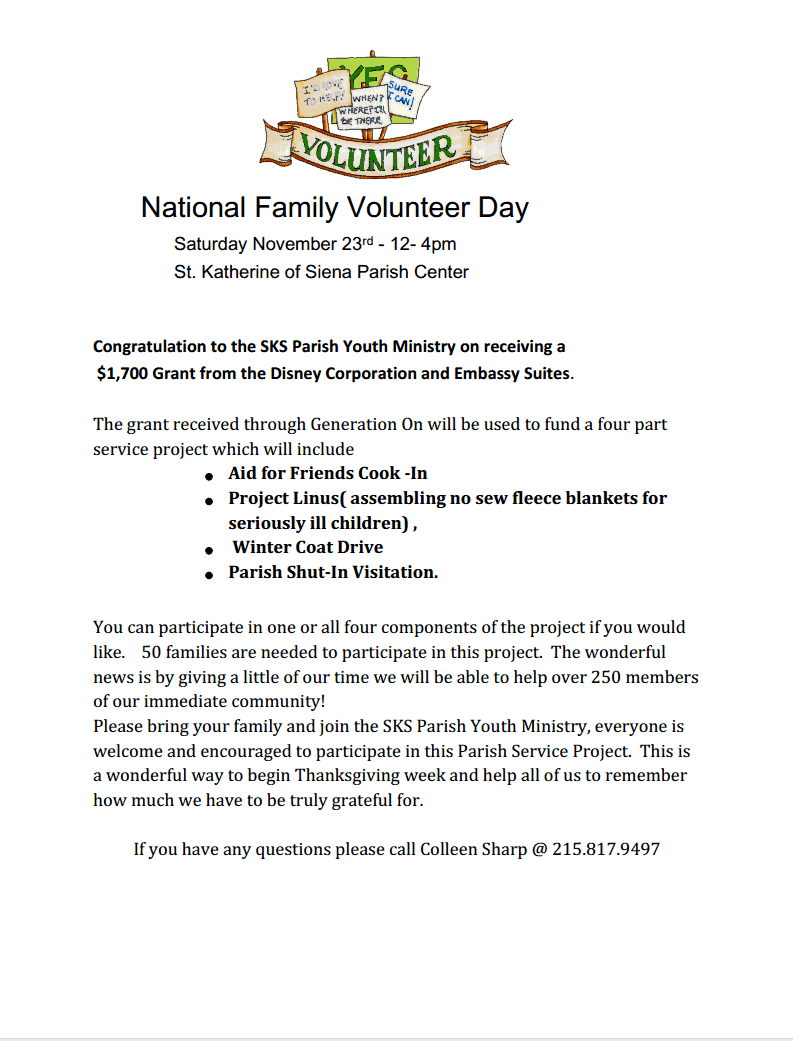 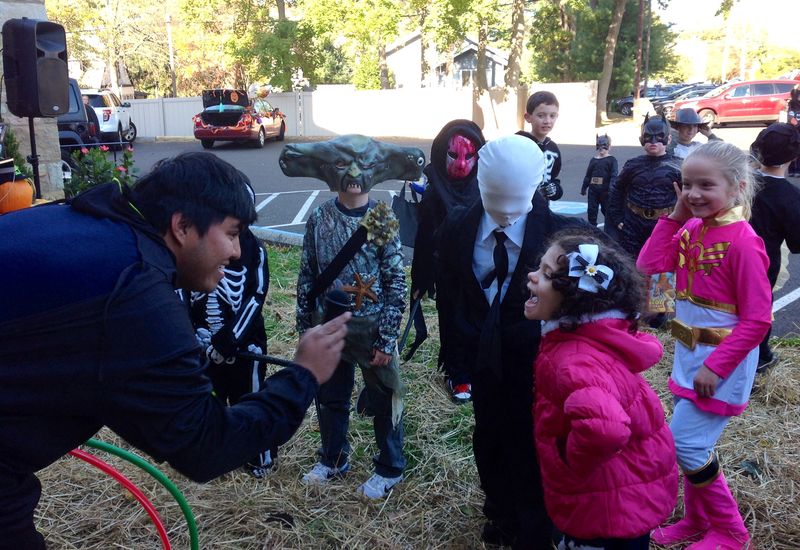 St. Katherine's first "Trunk and Treat" was a huge success.  Over 50 cars decoarted in themes ranging from "Candy Land" to "Finding Nemo"  lined the Curch parking lot  this past Sunday for this  one of a kind  Halloween Tailgate.  Buttons the Clown sculpted balloons while DJ Stevie D kept the kids busy with Costume Contests, Mummy Wrap competitions and plenty of Monster Tunes to Mash at.  Most importantly there were plenty of treats for the 125 Tricksters and a great timw was had by all! 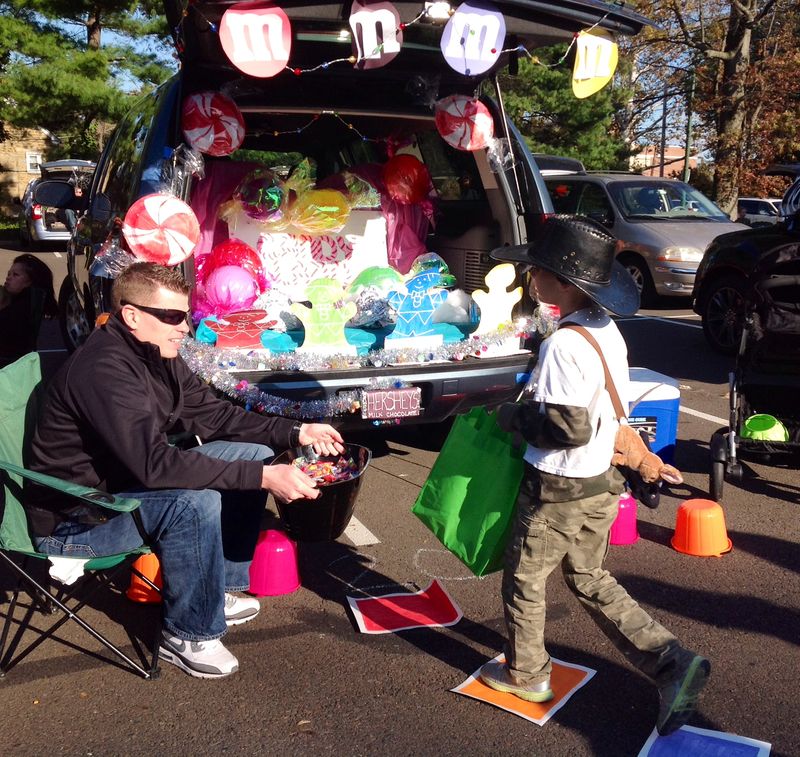 This proposal along with a site visit from the Pennsylvania Horticultural Society (PHS) was the catalyst which netted Father Ferrier and the St. Katherine of Siena Parish campus the coveted 2013 PHS Community Greening Award.  The award will be presented in Harrisburg during a reception in the Governor’s Residence on December 10th.  Congratulations Father Ferrier!

A Presentation to the

Like many urban green projects, our greening process was more of a reclamation project rather than starting from scratch.  In some ways, this is more difficult than beginning new.  Years of inattention, neglect, over planting and disregard can paralyze a property and make it stagnant to say the least.

Over the years plants, bulbs, perennials, bushes and even trees were place wherever there was a space or an open spot.  In our case, being a Church, there were many well meaning persons who wanted to plant their gift where they could see it, with little or no regard to scope and sequence of planting.  Bulbs were the main culprits since they would go undetected until the flowering of the spring then, truth-be-told, they were beautiful when they bloomed and thus left alone for another year.

Five years ago we began a systematic and determined renewal of the property and the flora.  Half dead bushes were removed.  Overgrown trees and bushes were pruned or trimmed.  Flower beds were renewed. Edges and borders were established and plantings which would complement the buildings and the grounds were chosen.  The idea was to have a complete picture of the property and how it could truly become a green space.

Over the intervening years we have made a few changes, a few additions, and a few replacements.  All directed toward unifying the property and simplifying the design.  The addition of an island in the parking lot which boasts a new flag pole, and a new outdoor original bronze sculpture presented a new challenge as to how to landscape the areas and how to include the new areas into the entire campus plan. Now, seasonal blooms complement the permanent landscape and add to the rhythm of the spring and summer seasons.

Since we have so many persons who come and go onto the property at different times it is important that there be some novelty that catches their eye as well as the permanent plantings on which they have come to rely and expect.

This year for example, we planted several rows of corn, as well as tomatoes and peppers along one of the highly traveled areas of the campus.  This gets and holds peoples interest as they judge the progress of the stalks and the produce.  Apart from these plantings there are several hanging tomato plants producing cherry tomatoes for local consumption, an herb garden, and flowering hanging baskets which accent the beauty of a 100+ year old building.

All of this is accomplished within feet of a busy city street complete with trackless trolleys, constant traffic and acres of macadam.  All in all, we have endeavored to add a touch of green to our part of the city and to give our neighborhood an example of can be done with some planning and hard work.

Saint Katherine of Siena School in Philadelphia was awarded a $20,000 grant by the Healy Education Foundation at the Celebration of Achievement event earlier this month.

The foundation's School Advancement Grants for Excellence (SAGE) recognize outstanding work in implementing the foundation's Catholic School Development Program (CSDP) Methodology to achieve sustainable growth. Saint Katherine of Siena was selected from among 17 schools that submitted proposals on how the award would be used to significantly strengthen advancement efforts.

"Its proposal was not only visionary and detailed just as any grant proposal should be, but it demonstrated a real understanding of the CSDP Methodology," said Christine Healey, president of HEF.

The Methodology establishes best practices in five key areas: governance, enrollment management, development, communications, and operations. Saint Katherine's winning proposal highlighted its early achievements: enrollment growth of 11% in just one year, the successful opening of two Pre-K classes in 2012-13, formation of a 21-member board of limited jurisdiction, contact initiated with more than 5,000 alumni, and introduction of an annual fund. It then provided an action plan and budget for upgrading marketing materials, implementing data management systems, and creating an advancement team to achieve its broader public relations goals and represent the mission of the school.

"We are most grateful to the Healey Educational Foundation for recognizing the wonderful work of Saint Katherine of Siena School who has shown boldness and innovation with their CSDP initiative," said Christopher Mominey, Secretary for Catholic Education. "This stands as another example of the excellent Catholic education that we are building upon here in the Archdiocese of Philadelphia."

Saint Katherine of Siena School is one of six elementary schools in the Archdiocese of Philadelphia participating in the pilot project PACE (Partners Advancing Catholic Education), made possible through the HEF partnership with the Connelly Foundation

Author of Rediscover Catholicism To Appear In Philadelphia Archdiocese 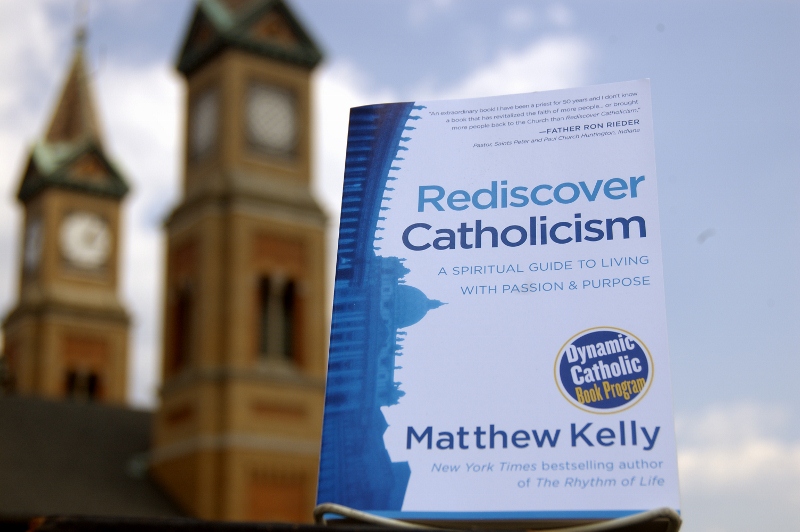 During Easter of 2013, thanks to a generous gift from a parishioner, many received copies of the book Rediscover Catholicism by Matthew Kelly.   Kelly, the author of several books, including Rediscover Catholicism and Fours Signs of a Dynamic Catholic  will be giving his Passion and Purpose Seminar from 9-1:30. Sat. Dec. 14th.

People who have attended this seminar have raved about it. I know it is close to Christmas, but I think it will be a great present to yourself or for someone else. St. Cyril of Jerusalem and Nativity of Our Lord are co-sponsoring the event--which means we are helping to sell tickets

Each ticket is $39--which includes all materials and refreshments for the day.  If you are interested in purchasing a ticket, please contact Ann Marie Gervino at  (215) 675-1925)